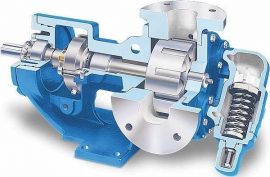 In addition to their wide viscosity range, the pump has a wide temperature range as well, handling liquids up to 750°F / 400°C.  This is due to the single point of end clearance (the distance between the ends of the rotor gear teeth and the head of the pump).  This clearance is adjustable to accommodate high temperature, maximize efficiency for handling high viscosity liquids, and to accommodate for wear.

The internal gear pump is non-pulsing, self-priming, and can run dry for short periods.  They’re also bi-rotational, meaning that the same pump can be used to load and unload vessels.  Because internal gear pumps have only two moving parts, they are reliable, simple to operate, and easy to maintain.

1. Liquid enters the suction port between the rotor (large exterior gear) and idler (small interior gear) teeth. The arrows indicate the direction of the pump and liquid.

2. Liquid travels through the pump between the teeth of the “gear-within-a-gear” principle. The crescent shape divides the liquid and acts as a seal between the suction and discharge ports.

3. The pump head is now nearly flooded, just prior to forcing the liquid out of the discharge port.  Intermeshing gears of the idler and rotor form locked pockets for the liquid which assures volume control.

4. Rotor and idler teeth mesh completely to form a seal equidistant from the discharge and suction ports. This seal forces the liquid out of the discharge port.